MyPlace > Real estate journal > How the Dollar Value Impacts Real Estate
Of the various factors that impact real estate prices a special place is reserved for the American dollar.
Share on
Share on Whatsapp

And this is despite amended provisions to the Consumer Protection Law, prohibiting the advertisement of real estate prices in a currency other than Israeli.

Nevertheless, there is still an undisputable impact of the dollar value on the Israeli real estate market – all the details are in the following article.

Almost all of us are aware of the effect of COVID-19 on the American economy and the value of the dollar, while the severity of the current crisis is often compared to the Great Depression of the 1930’s.

As a result, the American dollar, at 3.45441 NIS in January 2020, and peaking at 3.82462 NIS in mid March, just before the world pandemic broke out, suffered significant drops during the Corona crisis.

As part of its crashing, a low of 3.35467 NIS (Based on the Dollar to Shekel conversion check on behalf of the “Hamara” conversion calculator on October 11th, 2020 still has an extremely low value of 3.3755) was recorded at beginning of September 2020, constituting an extremely low value, especially when compared to the values recorded in 2012, when it stood at 4.045 NIS.

There is no doubt that in light of the worldwide Corona crisis, we are witnessing a significant drop in the American dollar and everything it entails.

The effect the decline in dollar value has had on the Israeli economy does not go without saying, and involves changes the Israeli market sustained regarding pricing in foreign currency in general and specifically in the real-estate market.

In this context it is important to note that in 2002 and 2004, the Israeli government  amended the Consumer Protection Law, prohibiting publishing and stating prices in a currency other than NIS, whether explicitly or otherwise.

A study conducted by Dr. Ben Shachar, head of the Elrov Institute for real estate research at the Tel Aviv University Management Faculty, and Mr. Roni Golan from the Architecture and City planning Faculty at the Technion, examined the effect of the changes in the pricing method.

The study’s findings show that the transition from pricing in dollars to NIS contributed to an increase of 31% in Israeli real estate prices, up to 2008, when the amendment requiring real-estate prices be stated in NIS only, was finally enacted.

One of the reasons for this impact lies in the fact that up until 2008, real-estate sellers exploited loop holes in the amendment and chose to state prices in NIS every time the dollar dropped, to avoid losses and price decline .

Reducing the Gap Between Privately Owned and Contractor Real Estate

While the market of new real estate was not under the impact of the dollar’s fluctuation for many years, since contractors followed the amended law and stated prices in NIS, privately owned real estate showed a different trend.

During the transition period from pricing in dollars to NIS, every drop in the dollar encouraged the buyers to buy real estate, but on the other hand left the sellers and homeowners vulnerable and suffering from this instability which affected the drop in prices.

The contractors were impacted by the gaps between the privately owned real estate market, which was still often priced in dollars despite the amended law, and the new real estate, which was published in NIS since the amendment took effect.

Nevertheless, eventually, the entire Israeli market transitioned to pricing in NIS only, thus protecting the households from financial risks involving trade in foreign currency that are a result of frequent fluctuation of the dollar rates.

Loans and Mortgages linked to the Dollar rate

Though the dollar no longer directly affects the Israeli real estate market, the trends recorded in the dollar rate still impact the market in several indirect manners.

Therefore, when the buyers are aided with loans based on linkage to the dollar rate, whose funds are linked to the daily exchange rate, whose value is re-determined every month on the monthly date of loan payment – or on the date the mortgage is fully paid.

In addition to changes in the fund, the loan payments are affected by the changes in interest rates, which is calculated once every 3-6 months, according to LIBOR – London Inter-Bank Offered Rate

The result –indirect impact of the dollar rate on the actual price home buyers are required to pay.

The Impact of the Consumer Price Index on Real Estate Prices

The Consumer Price Index is a value that truly reflects the price rates of merchandise and services in the Israeli market.

The Index is determined according to the average price of a Basket of Goods, set by the Central Bureau of Statistics, to represent the expenses of an average Israeli family.

This basket includes the price of housing, petrol, produce, apparel, media products etc., while the prices of products in the basket are assessed monthly.

On the other hand, as the price rate increases, and with it the index, the nominal interest, meaning the NIS interest, increases as well, so during periods characterized by low indices, loaners suffice with lower interest rates as do the mortgage banks.

It is also important to note that the banks take into account the differences between Index-linked loan payments and those that are not, and therefore they request higher interest rates for the non-linked loans.

Selling Your House? - Here are Some Important Recommendations

Although there is a sort of freeze on the housing market, and despite the fact that many sellers are finding it hard to sell – there are a few important recommendations worthwhile implementing that will aid buyers in reaching the decision: 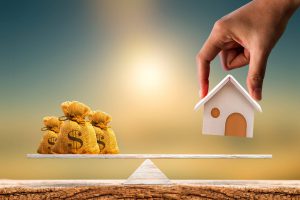